And you may ask yourself, well how did I get here?

Audiotarky started one Saturday morning in June, except it wasn’t called that then. My friend & colleague Matt pinged me a link to Grant for the Web & suggested I apply to, in his words, “make some bleepy music or something”.

I’ve been interested in all things web since the 90’s (I’m lucky enough to be a Xennial), but have been growing increasingly frustrated with the walled garden, surveillance capitalism that has become the majority way to pay for services and “content” online over recent years. I’ve also been making music in various forms & guises since about the same time, and have had a fascination with how the two intersect (remember the hey day of mp3.com?). This seemed like a perfect opportunity to “do something” interesting & beneficial.

Some hasty phone calls to various friends (music producers, lawyers, film makers), and a few spreadsheets later the grant application was submitted! It was very much a “nothing ventured…” attempt, but there was a nucleus of a good idea there, and I could see how it could come together.

More importantly there’s a very real problem, excellently described by Tom Gray in this thread, which has only been exasperated by the pandemic and (totally sensible) restrictions on being in large groups.

Those two things kept rubbing around in my head, and I spent some time over the summer thinking about how you could build what had been proposed, the problems and strengths of the ideas. I wrote some code and some blogs and got to the point where I had a “minimum viable product” of one piece of the puzzle. I was quite happy with that.

And then I got an amazing email - we’d been chosen by Grant for the web!

Helping musicians to maximize their potential income by making it easy to monetize recordings and smaller content like sounds, patches, and loops. We will provide musicians with a streaming music platform, and use it to compare revenue from Web Monetization to traditional methods, publishing this information and providing guidance to musicians on how to use the technology to supplement other sources of income.

So what does that mean? Well we’re going to:

There’s a lot we could do, but I’m going to be trying to avoid too many rabbit holes & keep focus on these areas - there’s enough work there! Once the platform is up and running, we’ll see where fate takes us.

Where did the name come from?

I was listening to the news and the word Autarky came up, and I liked the sound of it. Something musical & related to economic independence seemed like a good idea, and who doesnt love a portmanteau? 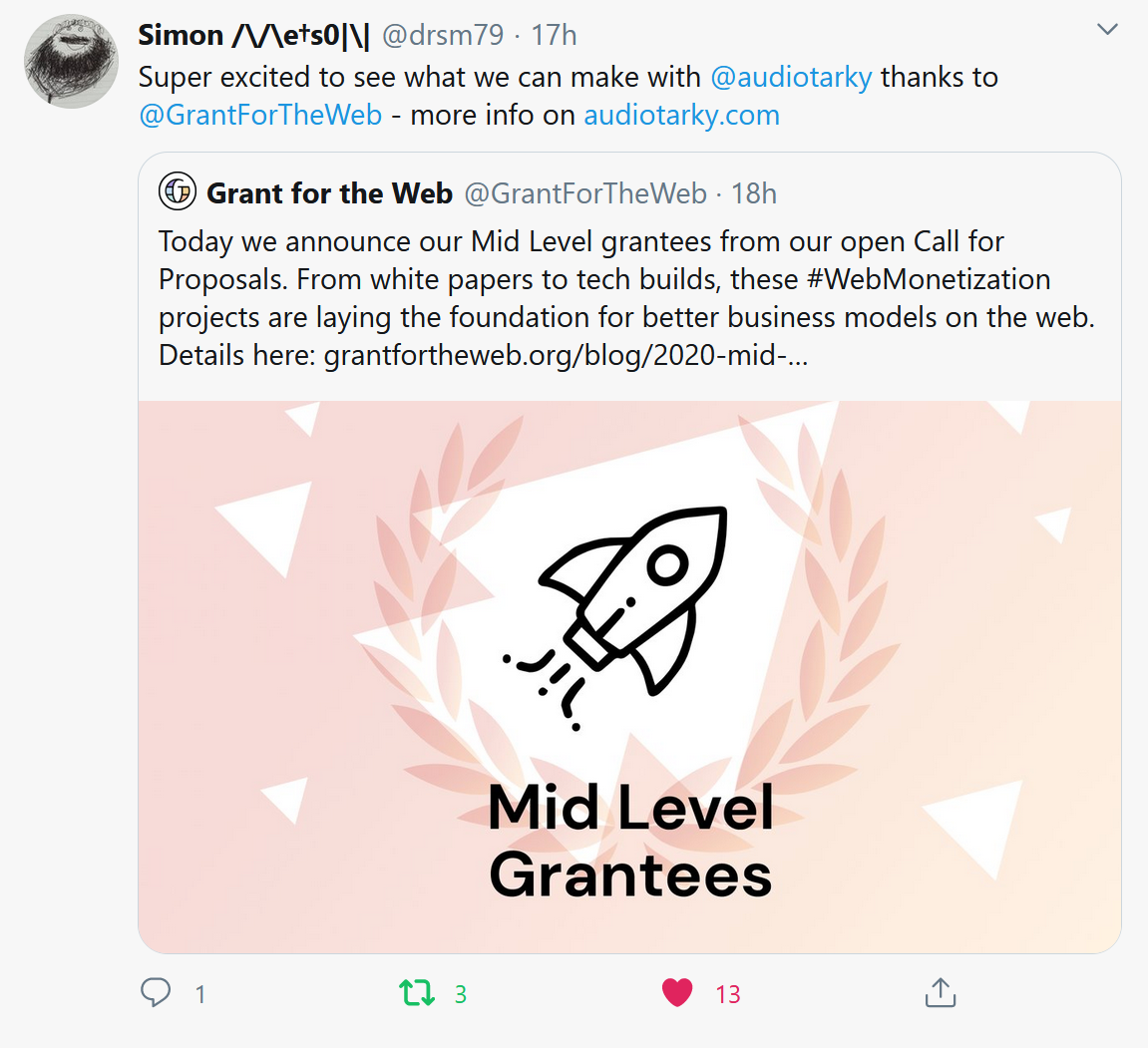